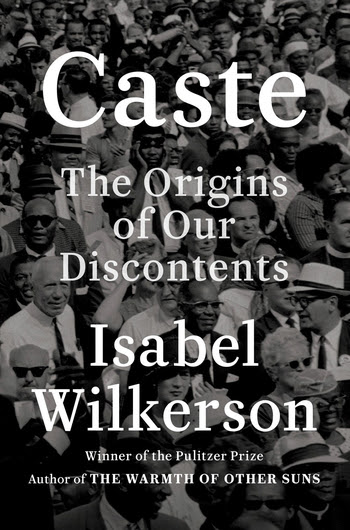 “In The Warmth of Other Suns, Pulitzer Prize-winning journalist Isabel Wilkerson eloquently traced the lives of the 6 million Black Americans who fled the Jim Crow South during the Great Migration. Never once in that 640-page book did she mention the word racism. “I realized that the term was insufficient,” she explains. “Caste was the more accurate term.”

Her latest book, Caste: The Origins of Our Discontents, is a much anticipated follow-up and couldn’t be timelier. In it, she examines the “race-based caste pyramid in the United States,” comparing this sociological construction to two other notable caste systems: those of India and Nazi Germany. “As we go about our daily lives,” Wilkerson writes, “caste is the wordless usher in a darkened theater, flashlight cast down in the aisles, guiding us to our assigned seats for a performance. The hierarchy of caste is not about feelings or morality. It is about power—which groups have it and which do not.”

Wilkerson’s comparisons are profound and revelatory. Chapters describe what she has identified as “the eight pillars of caste,” the methods used to maintain this hierarchy, such as heritability, dehumanization and stigma, and control of marriage and mating. In addition to such insights, including how immigrants fit into the caste system, what makes this book so memorable is Wilkerson’s extraordinary narrative gift. Highly readable, Caste is filled with a multitude of stories, many of which are tragically familiar, such as those of Trayvon Martin and Freddie Gray. The story of Sergeant Isaac Woodard Jr. is particularly shattering. Returning home on a Greyhound bus after serving in World War II, Woodard asked the driver to allow him to step off the bus to relieve himself, but the driver refused. When Woodard protested, the driver called the police and had him arrested. The police chief, in turn, blinded the returning soldier with his billy club.

Stories like these are painfully informative, making the past come alive in ways that do not beg but scream for justice. That said, Wilkerson is never didactic. She lets history speak for itself, turning the events of the past into necessary fuel for our current national dialogue.

Dismantling the caste system is possible. Wilkerson points out that Germany did it after World War II. But in the meantime, “caste is a disease, and none of us is immune.” If you read only one book this year, make it Caste, Wilkerson’s outstanding analysis of the grievances that plague our society.”