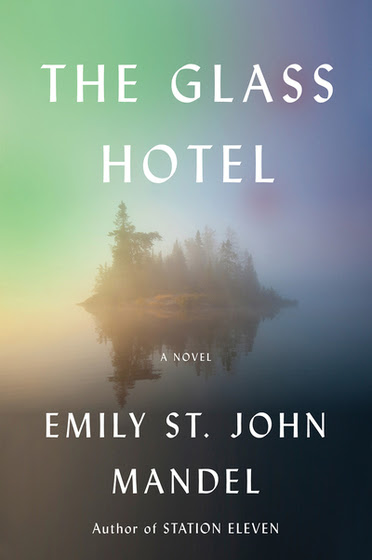 “The Hotel Caiette, the glass hotel of the title, is a super luxury hotel in a remote corner of Vancouver Island, a “five-star experience where your cell phone doesn’t work.” A young local woman named Vincent winds up working there as a bartender after some youthful bohemian years off the island. She is smart, witty and elegant. She catches the eye of Jonathan Alkaitis, the investment-fund mogul who owns the hotel and who soon invites her to become, essentially, his trophy wife. It’s a transaction she accepts. She moves to a posh house in Connecticut and thrives among the uber-wealthy. But it turns out that Alkaitis is running a Bernie Madoff-style Ponzi scheme. When it collapses, Vincent eventually begins a third life as an itinerant cook on an international container ship.

Mandel’s narrative does not unfold as directly and cleanly as this summary suggests. Rather, the story circles through time, deepening with each pass. This is one of its wonders. Another is how lively and sometimes mysterious the novel’s minor characters are. Vincent’s half-brother Paul, for instance, doesn’t steal money but instead appropriates an essential part of Vincent’s creative being. Alkaitis’ beloved older brother was a talented artist who died of a drug overdose, and that shapes Alkaitis’ interactions with one of his more vulnerable investors, an artist who painted a portrait of the brother. The wily Mandel even brings back characters from Station Eleven to playfully suggest that we are reading about a parallel universe.

Mandel is a vivid and observant storyteller. Some small observations make you laugh out loud. For example, that you can distinguish wealthy people from the Western U.S. from wealthy people of New York, because the former are prematurely weathered from all their skiing. But other observations are more somber. As Mandel writes, “There are so many ways to haunt a person, or a life.” In this novel, the hauntings are literal and metaphorical.

The Glass Hotel is a dark, disturbing story but also an enthralling one.”