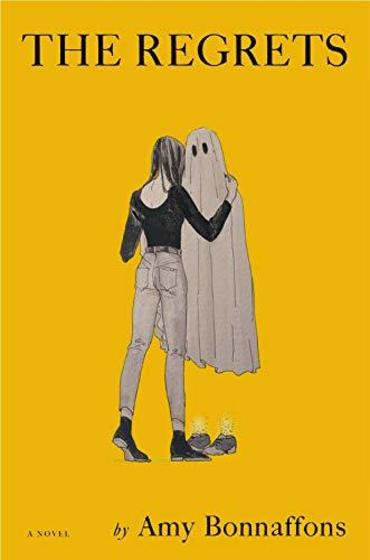 “For weeks, Rachel has been noticing the same golden-haired young man sitting at her Brooklyn bus stop, staring off with a melancholy air. When, one day, she finally musters the courage to introduce herself, the chemistry between them is undeniable: Thomas is wise, witty, handsome, mysterious, clearly a kindred spirit. There’s just one tiny problem: He’s dead.
Stuck in a surreal limbo governed by bureaucracy, Thomas is unable to “cross over” to the afterlife until he completes a 90-day stint on earth, during which time he is forbidden to get involved with a member of the living — lest he incur “regrets.” When Thomas and Rachel break this rule, they unleash a cascade of bizarre, troubling consequences.
Set in the hallucinatory borderland between life and death, The Regrets is a gloriously strange and breathtakingly sexy exploration of love, the cataclysmic power of fantasies, and the painful, exhilarating work of waking up to reality, told with uncommon grace and humor by a visionary artist at the height of her imaginative power.”
Click here for availability

Pursuant to Executive Order 202.13, the Library’s Annual (budget vote) Meeting and Election which was previously scheduled to occur on April 7, 2020, has been postponed until June 9, 2020, and will be conducted via absentee ballot for ALL VOTERS.

In addition, the circulation, filing, and collection of any signatures on nominating petitions associated with the Annual Meeting and Election is waived.