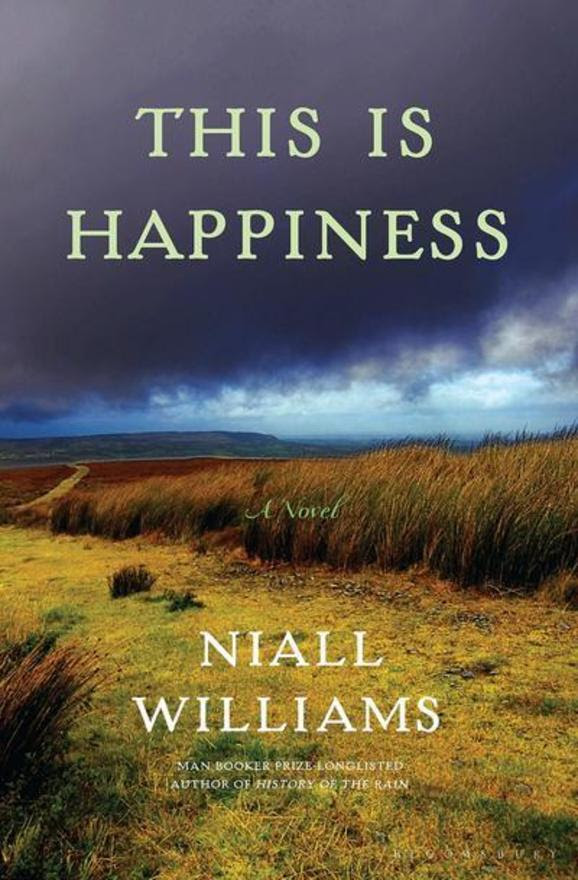 “Imagine a single sentence worthy of its own page. This Is Happiness opens with such a line, reporting that it has stopped raining. Why, you wonder, does this declaration deserve its own page? Especially in a novel about an ordinary Irish village called Faha.

Things have not gone irreversibly wonky in Faha, nor is the town enchanted like Brigadoon. It rains a lot in this village, because (to adapt James Joyce’s words) rain is general all over Ireland. When the rain stops, it’s news.

The narrator of the tale is Noel Crowe, called Noe. An old man when we meet him, Noe is looking back on a stretch of surprisingly rainless days from when he was a teenager in the late 1950s or so. At that time, Faha was clamoring about its new electricity, and Noe befriended one of the workers, an elderly man named Christy who was lodging with Noe’s kindly grandparents.

The beauty and power of Irish author Niall Williams’ writing lies in his ability to invest the quotidian with wonder. A truly peerless wordsmith, he even makes descriptions of gleaming white appliances and telephone wire sing. Readers will never forget the scene in which Christy and Noe get drunk in a pub and try to ride home on their bikes, nor Noe’s first kiss in the balcony of a movie house, an experience he endures from the fast-living sister of the girl he has a crush on. The book is hilarious among its many other virtues.

Buy, rent, get your hands on this book somehow and savor every word of it. Its title says it all: Plunging into This Is Happiness is happiness indeed.”