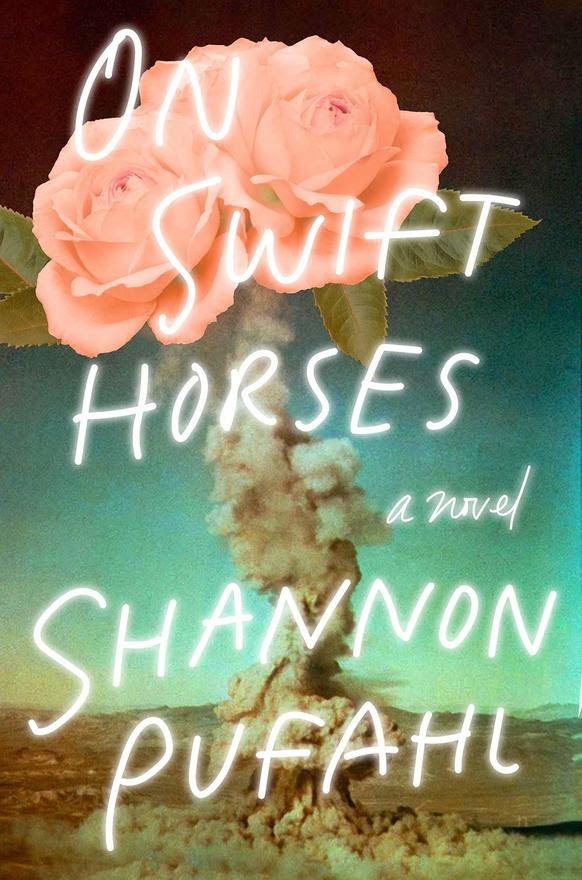 “It’s 1956, and in the American West, military servicemen are returning from Korea and Japan looking for work, the fledgling interstate system is going up, and bomb tests draw Nevada tourists to watch the explosions. This is the backdrop for Shannon Pufahl’s assured debut, On Swift Horses, set in a time and place where the new and old rub up against each other, often uncomfortably.

As the novel opens, Muriel has left her native Kansas for Southern California to join her new husband, Lee. Lee gets a factory job, and Muriel waits tables at the Heyday Lounge near the Del Mar race track. As she listens to the bar’s regulars, she picks up some insider horse-racing knowledge, which she chooses not to share with Lee. She also pines for Julius, Lee’s unruly younger brother. Julius, meanwhile, gambles and risks his life, first in California, then in Las Vegas and Tijuana, Mexico.

As different as Muriel and Julius are, they both harbor secrets—one of which Muriel shares with Julius early in the story. And they’re both trying to find a way to love more truly and openly, since neither fits into the strictures that 1950s America wants to keep them in.

On Swift Horses offers many painful reminders of the damage that repression can do, but it’s also a deep-breathing, atmospheric novel. Pufahl renders postwar San Diego, the characters’ rural poverty and 1950s closeted gay life in careful detail, spinning plain language into beautiful images. Her prose carries hints of other writers who combine the bleak and the hopeful, such as Annie Proulx, Wallace Stegner and Kent Haruf. While the novel’s middle drags a little, Muriel’s and Julius’ journeys are compelling and surprising. Pufahl is a novelist to watch.”