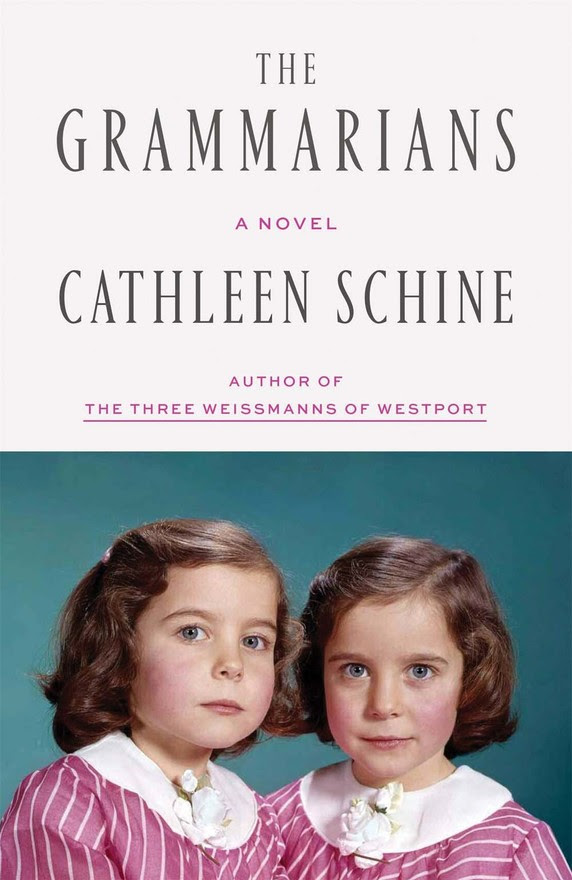 “Identical twins Laurel and Daphne Wolfe, both named for the same minor Greek goddess, shared everything: a womb, a language known only to themselves, the red hair that set them even further apart from their peers (only 2% of the world’s population are gingers, less than the 3.3% that are twins). They also share a love of English that (and they would adore the irony) cleaved them together as much as it cleaved them apart.

Long before their first adolescent stirrings, the pair fell head-over-heels for words. Daphne amassed rare ones (rebarbative, hendiadys, aposiopesis) in her notebook, the same way other kids collect sea glass or baseball cards. Laurel looked them up in their father’s massive Merriam Webster’s Second Edition. They played with words, quarreled over words, used words as both rapier and armor.

Author Cathleen Schine is a keen student of both language and families, and The Grammarians calls to mind the likes of Nora Ephron or Joan Didion. It’s not every verbal stunt pilot that can bring a mid-novel excursus about the differences between Webster’s Second and Third editions to a safe landing.

As for the sisters, Schine renders a note-perfect portrait of how shared DNA can foster a ferocious internal rivalry, while it renders the pair nearly impervious to attack from the outside world. When the big rift does descend, it’s a proxy war but devastating nonetheless: prescriptive grammar versus descriptive, Fowler’s Dictionary of Modern English Usage versus The Chicago Manual of Style. Daphne’s somewhat hectoring grammar column, “The People’s Pedant,” has found a modest but passionate audience, and it puts her on the obverse side of a coin with sister Laurel, whose poetry celebrates the authenticity of those for whom grammar doesn’t really exist. Words are exchanged, but fewer and more rarely. As they say, the reason that our families can push our buttons is because they’re the ones who installed them.

The big question becomes whether there is a dictionary sufficiently large and complex to contain the words that Laurel and Daphne need to build a bridge back to one another, or whether they will remain like their identical DNA, a double helix whose twin coils never really meet.”