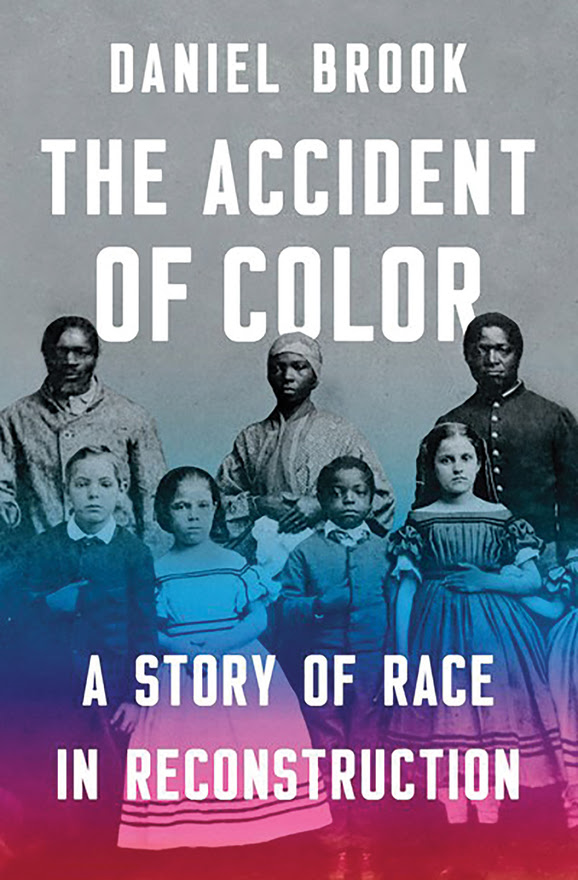 “Daniel Brook’s The Accident of Color: A Story of Race in Reconstruction is fast-paced and intriguing, revelatory and provocative. Drawing deeply on archival materials, Brook brings to life the complex notions of race that developed in the years leading up to the Civil War and the ways that various forces diminished such complexity during Reconstruction, reducing race to the restrictive binary—individuals are either black or white—that dominates conversations about and practices surrounding race in America today.

Focusing primarily on Charleston, South Carolina, and New Orleans, Louisiana, Brook reveals that multiracial groups—Creoles of color in New Orleans and Browns in Charleston—worked to promote the liberty and equality promised to all men in the Declaration of Independence. For example, Creoles educated their children in private academies in New Orleans. Both in Charleston and New Orleans, multiracial people were prosperous landlords and hairstylists and business owners. These free people of color sometimes owned slaves, but following the Emancipation Proclamation, multiracial individuals often formed alliances with freedmen to work against white politicians’ and landowners’ attempts to legislate segregation based on race.

Along the way, we meet characters such as Pierre Gustave Toutant Beauregard of New Orleans and Francis Lewis Cardozo of Charleston, each of whom led groups of freedmen and free men of color and lobbied to be subject to the same laws that govern white men. By the end of Reconstruction, however, both states had established Jim Crow laws that rigidly defined race as either black or white, with black people determined as those with just one drop of African or Caribbean blood in their ancestry.

Brook’s illuminating and lively study illustrates that, given the diverse heritage of America, it was never possible for races to be separate. He concludes that the racial binary is a social construct and that, in truth, American history is Creole history.”