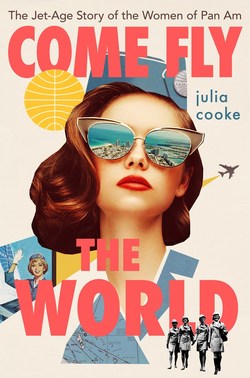 “In 1967, Coffee, Tea, or Me? The Uninhibited Memoirs of Two Airline Stewardesses captured the world’s imagination with tales of amorous adventures. Decades later, Donald Blain revealed that as a publicist for American Airlines, he actually wrote the book and its sequels, and two female flight attendants were hired to pose as the authors for book tours. Although the stunt sounds like something from “Mad Men,” readers fell for it hook, line and sinker, casting an indelible reputation on the profession.

“The industry saw no reason not to capitalize on male fantasy,” writes Julia Cooke in the fascinating Come Fly the World: The Jet-Age Story of the Women of Pan Am. Cooke has created a sweeping account of not only the airline industry and its cultural history but also women’s evolution in the workforce. She blends an overview of the job with the personal stories of several (real!) flight attendants, dispelling ludicrous myths and showing how Pan Am presented adventurous, curious women with a way to see the world at a time when their opportunities were limited.

Stewardess positions were so coveted in the 1960s that in 1968, over 266,000 women applied for 12,000 spots in the American airline industry. Many of these young women, such as biology major Lynne Totten from upstate New York, saw the job as an exciting chance to try something new. Years later, when a male passenger spotted Totten reading an issue of Scientific American, he suggested that Vogue might be a better choice. She quickly set him straight, but Totten was hardly an anomaly. As Cooke points out, “throughout the 1960s, 10 percent of Pan Am stewardesses had attended graduate school at a time when only 8 percent of American women had graduated from college.”

Despite the unparalleled opportunities offered by Pan Am, these stewardesses had to pave their own way, fighting against weight and height limits, age ceilings, marriage bans, racism and other glass ceilings that prevented them from being offered management positions.

An entertaining and informative narrator, Cooke has a big story to tell and excels at painting her panorama in broad strokes. At times, however, readers may find themselves wishing for a few more anecdotes, as well as more direct quotations from the women she profiles. Nonetheless, many of her accounts are memorable, especially those involving Pan Am’s flights to Vietnam, which Cooke covers extensively and in which young American men reading Archie comics were dropped off, many to never return.

Come Fly the World is an eye-opening account of female flight attendants’ successes and struggles in the not-so-distant past.”