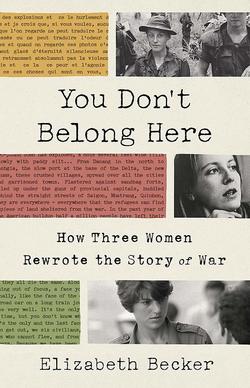 “Award-winning journalist Elizabeth Becker turns her insightful gaze on three women who covered the Vietnam War in You Don’t Belong Here. Becker, who has firsthand experience of Southeast Asia and the challenges facing women in the field of journalism, begins her book with a personal anecdote. In 1973, while she was on her way to Cambodia to become a war correspondent at the age of 25, Becker met Kate Webb, a New Zealand-born Australian journalist who had survived capture by the North Vietnamese. Webb posed one question to the young reporter: Why had she crossed the ocean to cover a war?

Becker’s examination of three journalists’ careers—Webb, Frances FitzGerald from America and Catherine Leroy of France—powers this absorbing narrative about the challenges of covering the Vietnam War. As Becker explores the significance of these women’s legacies, she notes that “it took us decades to understand what we had accomplished as women on the front line of war.”

A few women (such as World War II reporter Martha Gellhorn, who stowed away on a hospital ship on D-Day) had done their best to report on wars in the past, but the United States military didn’t make it easy for women seeking to be war correspondents. Up until the war in Vietnam, women were forbidden on the battlefield. Even after that changed, news organizations still sent male journalists as a matter of course, with the result that most of the women covering the Vietnam War had to pay their own way and fight to stay.

Many of these barriers were eventually broken, thanks in part to the extraordinary women Becker profiles so adroitly here, combining their personal histories with the major events of the conflict. Leroy, a French photojournalist who died in 2006, was an experienced parachutist who used her skills to cover a parachute jump into combat and whose searing images appeared in Life magazine. Webb was one of the few journalists on the Navy command ship when the order to evacuate came, and she was able to file a report on April 30, 1975, the very day the war ended. FitzGerald later wrote a book about her experience on the ground, Fire in the Lake, which looked at the history of Vietnam and its people and won both the Pulitzer Prize and a National Book Award.

As to the question Webb posed to the author, perhaps it was best answered by Leroy, who once said, “I wanted to be there, to see it happen.” You Don’t Belong Here is a significant contribution to the history of both the Vietnam War and women in journalism.”