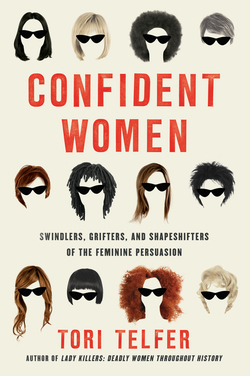 ““Con men” is a familiar term for slick, slippery dudes who are out to relieve their victims of money—often taking honor, dignity and a prosperous future along with it. Now meet Tori Telfer’s Confident Women: Swindlers, Grifters, and Shapeshifters of the Feminine Persuasion. These ladies lured people with their reassuring self-confidence and then, post-swindle, left their victims’ own confidence forever shattered. Tricked. Deceived. Cast aside with picked pockets and broken hearts. It’s awful stuff, but with Telfer at the wheel, reading these tales of plunder—littered with diamonds, fancy cars, mansions, booze and furs—is a fun, spicy romp.

Take Cassie Chadwick, a 19th-century counterfeiter and fortuneteller who proves “that the most ordinary woman could become someone truly memorable if they just bluffed hard enough.” Among other things, she claimed to be Andrew Carnegie’s illegitimate daughter (unbeknownst to him), swindling bankers out of a fortune before finally getting caught. Though she died in prison, perhaps she could rest in peace knowing that female scammers had become known as “Cassies.”

Then there’s Tania Head. A member of what Telfer calls “the tragediennes,” Head claimed to be a survivor of the 9/11 terrorist attack in New York City. She described her ordeal in such excruciating detail that she became a hero, a “World Trade Center superstar” and the “undisputed queen of the survivors.” But was she even there that day?

Anastasia Romanovs abounded in the 20th century, each claiming to be the youngest child of Nicholas II, Russia’s last czar. Among them were Franziska and Eugenia, whose accents didn’t sound quite right but who were believed and supported anyway—until “DNA, that great equalizer, eventually came for both.”

As Telfer stuffs the stories of these grifters, drifters, spiritualists and fabulists in mesmerizing detail, she more than succeeds in giving them their due. But, she warns, make no mistake about the damage they left in their wake. Confident Women is also a dark cautionary tale about the fragile nature of trust and why we choose to believe.”