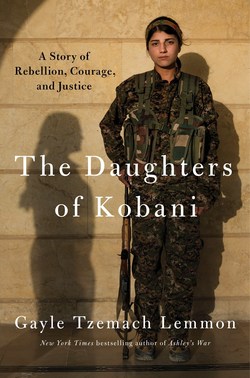 “The story of how young Kurdish women brought down terrorists from the Islamic State group has been waiting to be told. If Kobani, Syria, is a city that has gone unnoticed in the saga of Middle Eastern wars, then The Daughters of Kobani: A Story of Rebellion, Courage, and Justice will change that. It’s the story of a new generation of combatants, long denied choices about education, marriage or their very futures, who vanquished hosts of kidnappers, rapists and enslavers. Yet when author and journalist Gayle Tzemach Lemmon was asked to tell their story, she hesitated. “It just doesn’t make sense that the Middle East would be home to AK-47-wielding women driven with fervor and without apology or hesitation to make women’s equality a reality—and that the Americans would be the ones backing them.” She decided to go see for herself.

By 2016, civil war was tearing Syria apart, leaving room for ISIS, with help from allies such as Russia and Iran, to swagger in. President Barack Obama pledged that there would be no American troops on the ground; American support would have to come from the air, with airstrikes and weapons drops, while consultants and diplomats strategized from afar. On the front lines in Kobani were women like Azeema, trained as an expert sniper, and her childhood friend Rojda, whose mother still called her every day.

Based on hours of on-the-ground reporting and countless interviews with Kurdish Women’s Protection Units (YPJ) fighters, Lemmon delivers a vivid, street-by-bombed-out-street account of the final days of the battle for Kobani. Strewn throughout are reports of what the soldiers were up against: appalling ISIS acts like beheadings, torture and worse. The YPJ was outnumbered and underequipped, but they were fearless.

The battles for Kobani, and later Raqqa, were key moments in a history that is still being made. With international interest waning and ISIS sleeper cells and foreign fighter recruitments quietly continuing, ready to reignite the landscape, those Kurdish and Arab victories in 2017 and onward hold no guarantees. As Lemmon observes, it is “easier to kill a terrorist than to slay an ideology.” Still, no matter the final outcome, the women who fought this war have shown the world what courage and justice look like. And if the next generation must keep fighting, these warriors have shown them how.”