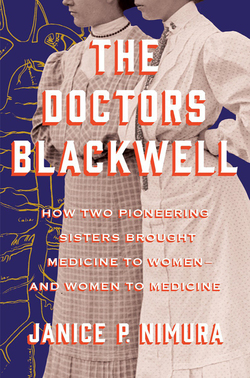 “Florence Nightingale and Dorothea Dix loom large as women who reformed health care in the 19th century—in the fields of nursing and mental health, respectively—but Elizabeth and Emily Blackwell have remained largely unrecognized for their roles in medical history. No longer, though, for Janice P. Nimura’s compelling biography The Doctors Blackwell: How Two Pioneering Sisters Brought Medicine to Women and Women to Medicine reclaims the sisters’ enduring contributions to medicine and to women’s history.

In breathtaking prose and exhaustive detail, Nimura chronicles the lives of the Blackwell sisters—their childhood in England, their immigration to America, the challenges they faced as they made their way in the medical profession and their eventual establishment of institutions that would provide both access to quality medical care for women and a place where women could study medicine in order to practice it.

Attracted to healing as a teenager, Elizabeth saw medicine as a noble vocation, but as she sought to embrace her calling she encountered resistance at almost every turn. Eventually she was able to graduate from Geneva Medical College in New York, becoming the first woman in the U.S. to earn a medical degree, after which she set up a practice in New York City. Emily followed in her older sister’s footsteps, attending Rush Medical College in Chicago and the Medical College of Cleveland, where she became the third woman in the U.S. to receive a medical degree. In 1857, the two sisters founded the New York Infirmary for Indigent Women and Children, and in 1868 they opened the Women’s Medical College in New York City, where Elizabeth taught courses on sanitation and hygiene and Emily taught obstetrics and gynecology. By 1900, the college had trained more than 364 women, and the sisters’ work led to thousands of women becoming educated in the medical field.

Nimura’s compelling biography not only recovers the lives and work of Elizabeth and Emily Blackwell but also provides a colorful social history of medicine in America and Europe during the mid- to late-19th century.”