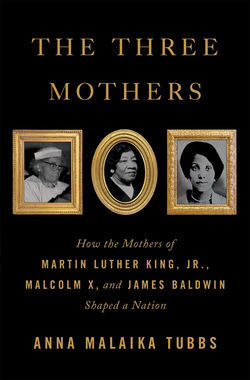 ” In The Three Mothers: How the Mothers of Martin Luther King, Jr., Malcolm X, and James Baldwin Shaped a Nation, Anna Malaika Tubbs tells three stories that are often overlooked but deeply important to civil rights history. Tubbs explores the lives of “the women before the men,” as she calls them: Alberta King, Louise Little and Berdis Baldwin. Though each woman came from a different part of the U.S. and the Caribbean, faced diverse social and economic challenges and had divergent interests and ambitions, Tubbs knew that, because the women were so close in age (by some accounts their birthdays are only six years apart), she would find common ground among these women’s lives that superseded their connections to famous men.

Tubbs intentionally chose the mothers of leaders whose lives have been well documented so she could focus on the women’s lives instead. In this way, The Three Mothers offers space for Tubbs, a debut author, to weave biography and social commentary with the complex history of Black women living in the 20th century. Tubbs also makes room for moments of discovery that help us better understand how each of these civil rights icons’ social activism and artistic endeavors were shaped by their mothers’ shining examples. For instance, Alberta King’s radical maternal tenderness set the groundwork for how her son would view himself as a “mother” birthing a dream of racial equality. We also learn how Louise Little’s childhood love of dictionaries would lead her incarcerated son, Malcolm, on a quest for knowledge that would reroute his early delinquency, and how Berdis Baldwin would pass on her gift of both the written and spoken word to her oldest son, James.

As Tubbs explained in an interview for BookPage, there is a troubling binary between motherhood and intellectual labor, and her writing about three women whose sons’ lives were shaped by their mothers (and not vice versa) is an attempt to turn that binary on its head. The Three Mothers does just that, expanding conversations about King, Malcolm X and Baldwin beyond what these men gave the world to include what the world gave them through the lives of three intelligent, ambitious, trailblazing women.”