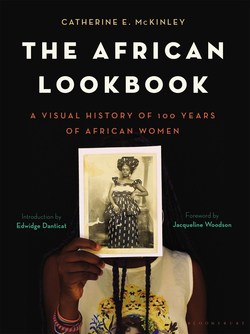 ““There is no perfect exegesis,” writes Catherine E. McKinley about the photographs in The African Lookbook: A Visual History of 100 Years of African Women, which presents just over 150 pictures of African women between the years 1870 and 1970. Any composed explanation of the photographs would be fictional since so much about them is unknowable. Many subjects are anonymous and many images undated. Rather than an exegesis, then, what McKinley offers in this compelling, quixotic book is something closer to a testament—a bold declaration of the enduring strength, beauty and power of African women, many of whom gaze at the camera with evident self-possession.

The book is a pleasure to absorb, whether you already know about the history of photography on the African continent or are new to the conversation. All the images are from McKinley’s personal collection, gathered over many years, and they seem to announce themselves with joy. From colonial-era photographs to studio portraits to postcolonial expressions of cosmopolitan poise, the collection offers a vibrant, inchoate and compelling snapshot of African women over time.

McKinley accompanies the photographs with prose, occasionally explaining an item in the picture—for example, “She wears the silver chains of the Ga people.” In response to other images, McKinley shares her wonder: “Whose room is this? Who chose the flower for my lady’s hair?” In other moments, McKinley interprets the subjects’ expressions, as when she describes the faces of three young women: “The girls have a look of expectation: an awareness that the world is large and made up of things they have the gumption for.” In all cases, McKinley helps the reader to see more, and thus think more carefully, about the image at hand. She gets close to the pictures without forcing a narrative that oversteps what can be known from the evidence.

Throughout The African Lookbook, McKinley puts African women at the center of their own stories, exploring their pictures with admiration and respect and inviting readers to look alongside her.”