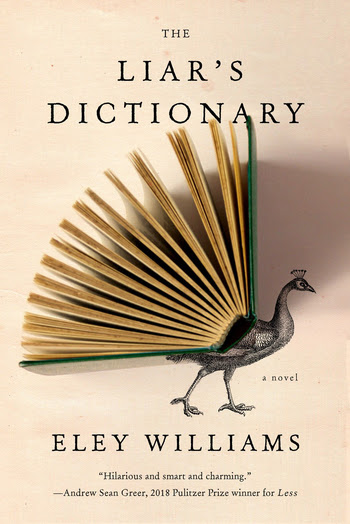 “Two lexicographers employed by the same company and separated by a century are at the heart of The Liar’s Dictionary, an imaginative, funny, intriguing novel by Eley Williams, author of the critically lauded 2017 short story collection Attrib. and Other Stories.

At the end of the 19th century in London, Swansby House is a place of high hopes and bustling industriousness. There, Peter Winceworth writes the letter “S” entries for Swansby’s New Encyclopaedic Dictionary. He’s also in a pickle of his own making: From childhood, he has affected a lisp as a means to get special treatment, and the stress of maintaining the ruse ensures an undercurrent of discomfiture in his every interaction. Combine that with his irritatingly extroverted co-workers and an unrequited crush on a colleague’s fiancée, and he needs a release—which comes in the form of false entries (or mountweazels) that he secretly inserts in the dictionary as an act of quiet, clever rebellion.

In the present day, intern Mallory is the sole employee of Swansby family descendant David, who is determined to complete the dictionary after a century of lying fallow. Production was halted by the onset of World War I, during which the staff perished and the printing presses were melted down for munitions. David wants to give the dictionary new life by digitizing it, but first Mallory must suss out and remove the mountweazels that pepper its pages. She’s also assigned to phone-answering duty, which isn’t as mundane as it sounds: Every day, a stranger threatens violence because the definition of marriage is changing. These calls are particularly distressing because Mallory is struggling with coming out.

Williams ushers readers back and forth in time as Peter and Mallory wrangle with capricious office politics, unresolved romantic feelings and the assorted indignities of being human, often to hilarious effect. The author has a gift for writing set pieces and inner monologues that at first seem quotidian and then gradually spiral—or soar—into delightful absurdity.

In The Liar’s Dictionary, Williams has created a supremely entertaining and edifying meditation on how language records and reflects how we see the world, and what we wish it could be.”