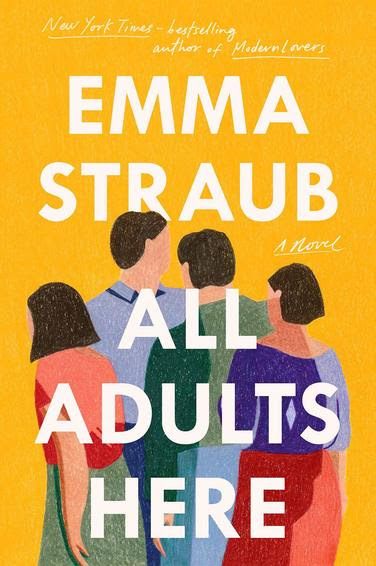 “No one engages a reader quite like Emma Straub. I was 30 pages into her warmhearted new novel, All Adults Here, before I even realized it. Her writing is witty, informal and deceptively simple, drawing readers in as if they’re having a conversation with a close friend.

Events take place in a small, fictitious town in New York’s Hudson Valley and center on the Strick family. The matriarch is 68-year-old widower Astrid, who witnesses an acquaintance being struck and killed by a school bus. This brings to light Astrid’s long-standing animus toward the victim, who, years ago, informed Astrid that her eldest son, Elliot—now a successful builder, married with kids—had been spotted kissing another boy. The fact that Astrid admonished Elliot, albeit subtly, has plagued her ever since, particularly now that she is in a same-sex relationship with her hairdresser, Birdie.

Indeed, gender and sexuality are some of the central themes of the novel. Astrid’s daughter, 37-year-old Porter, pregnant via a sperm bank, embarks on an affair with her former high school boyfriend, who is married with kids. Astrid’s youngest son, Nicky, and his wife have sent their daughter, Cecelia, to live with Astrid after a scandal involving online pedophilia in her former Brooklyn school. At Cecelia’s new school, she befriends August, who is transitioning into Robin.

Along the way, Straub imbues the novel with her trademark humor and comic turns of phrase, particularly Porter’s one-liners. Straub has taken on a lot of issues—gender politics, abortion, bullying, sexual predators—and it’s to her credit that the subject matter never seems heavy-handed or detracts from the momentum. The characters are believable, and events unfold naturally.

I found myself stepping onto a few trapdoors while trying to predict the plot. Having read Straub’s other novels, I should have known better; she’s always one step ahead.”