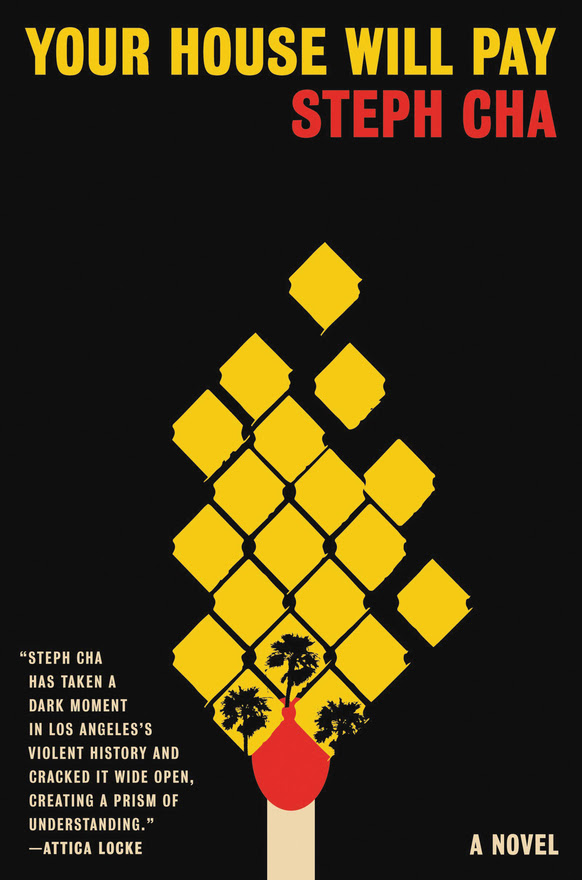 “Steph Cha’s nerve-scraping novel—with its biblical, plangent title and painfully relevant plot—could be described as triggering, depending on the reader. Your House Will Pay is based on a particularly sickening episode during a particularly sickening period in American history. In 1991 Los Angeles, Korean grocery store owner Soon Ja Du shot 15-year-old Latasha Harlins in the back of the head after accusing her of stealing. The horror was caught on video, and although Du was convicted of voluntary manslaughter, she never went to jail.

Who was this woman who pulled the trigger? Who was the girl she shot? To answer this, Cha has fictionalized the players, with Du turned into Yvonne Park and Harlins into Ava Matthews, and has brought them to life through the eyes of their loved ones. In Yvonne’s case, this means her taciturn husband, Paul, and their daughters, Miriam and Grace. After Yvonne kills Ava, the Parks escape into anonymity. They run a tiny pharmacy in a mall filled with modest Korean businesses and keep to themselves.

As for Ava, she and her brother, Shawn, were raised by their aunt Sheila after the death of their mother. Sheila’s son, Ray, is more like a brother than a cousin. The comings and goings of this African American family are far more dramatic than those of the reclusive Parks. Shawn and Ray have been in and out of gangs and, unlike Yvonne, in and out of jail. For most of the book, they’re middle-aged and determined to stay on the straight and narrow. Ray is a husband to the faithful Nisha and a father to their children, and Shawn is helping his girlfriend raise her adorable toddler. Then something terrible happens, and the Parks and the Matthewses are thumped back to square one.

The heart of the book is how alike these people are. They work, they eat, they pray, they love; their devotion to their families is painful. They are caught up in a racial pathology that came into play long before the Parks emigrated to America and before any member of the Matthews family was born. That pathology led them to turn on each other.

What Cha wants the reader to understand through her straightforward prose is that none of what happened between these two families had to happen, and everybody’s house pays.”