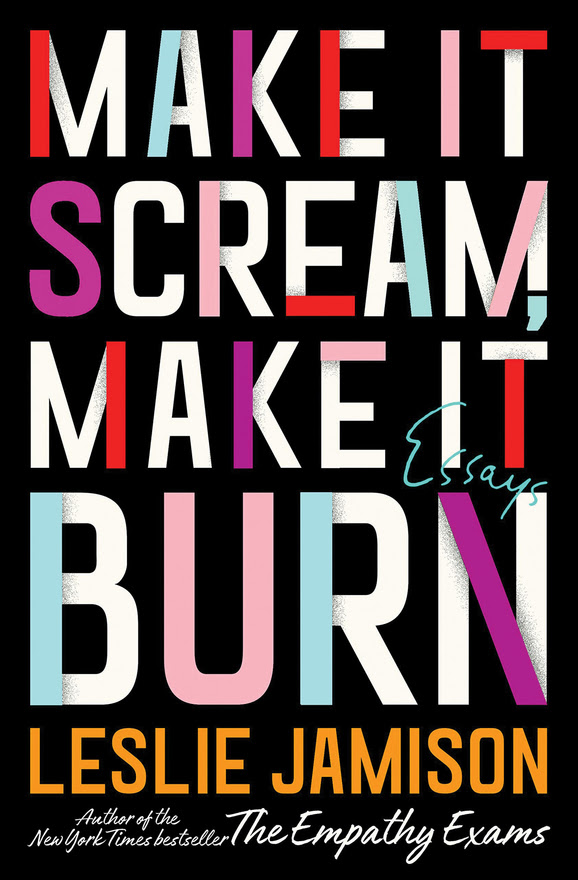 “A tattoo that runs up the arm of acclaimed essayist Leslie Jamison reads Homo sum: humani nil a me alienum puto, or “I am human. Nothing human is alien to me.” Her new collection, Make It Scream, Make It Burn, puts her tattoo to the test. Jamison investigates outsiders: people who obsessively identify with a whale known as 52 Blue, people who believe their children have been reincarnated, people who linger in the online world of Second Life. She takes her subjects seriously, but she also finds herself at a loss to relate. Sometimes connection is impossible. Of her interaction with someone who doesn’t speak English, she writes, “Nothing that is human is alien to me, I would have told him, except I couldn’t, because some things are alien to me, like the Sinhalese language.”

Beyond the limits of relatability, she also explores the weightiness of one person trying to document the life of another. In my favorite essay, she traces the unraveling of Walker Evans and James Agee’s trip to the South, which they completed on Fortune magazine’s dime in 1936 and which resulted in the widely acclaimed Let Us Now Praise Famous Men in 1941. Her astute analysis of the differences between the draft of the magazine article and the published book blew me away.

She deepens her exploration of this theme in subsequent essays, detailing her own journalistic romp to a foreign land and the difficulties of trying to write about what she saw there, and also the way that feminists such as photographer Annie Appel have obsessively returned to their subjects to try and resist the limits of witnessing. Appel has documented herself alongside her Mexican subjects and has, over time, allowed her story to become intertwined with theirs.

The perils of representation weigh on many people, certainly, but perhaps especially on artists. Jamison’s title Make It Scream comes from a review of Agee’s famous book by poet William Carlos Williams. For Williams, it is the duty of the artist to make life scream and smolder—to show the urgency that underlies and interconnects our lives. Nothing human is alien to me. For her readers’ sakes, I hope Jamison will keep pursuing this ideal.”